But your work and the work of police officers across the country is like no other. For the moment you put on that uniform, you have answered a call that at any moment, even in the briefest interaction, may put your life in harm’s way.

The Police force is our first line of defense when our lives and properties are in danger. They are ready to run to our rescue the moment we scream or call for their help. The hard work they put into their jobs is almost incomparable to any. Even more, the way they risk their lives for us deserves every inch of our respect.

For these reasons, thousands and thousands of individuals apply for a chance to be a part of the United States Police Force. Not just for the high pay, they can get, but for the honor, they receive from being able to put their lives on the line in the services of others. 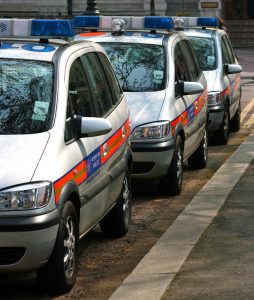 Luckily, the police force is always looking for people who are more than willing and capable to “serve and protect.” Police departments always have vacancies for anyone interested. What’s even better is that there are many types of career you can get into to suit your skills and preferences.

Available Careers In The Police Force

The job you can take under the police force depends primarily on the qualifications and certifications that you have accomplished. These may include your educational attainment, the course you took in college, your skills and capabilities, and much more.

Here are some of the most common careers available under the police department:

Being a patrol officer is one of the most dangerous, not just under the police profession, but among all jobs. In 2016 alone, 145 patrol officers were reported to have died in the line of duty, with 63 of those being gun related. (1)

It is the mission of the Los Angeles Police Department to safeguard the lives and property of the people we serve, to reduce the incidence and fear of crim

e, and to enhance public safety while working with the diverse communities to improve their quality of life.

Their duty is to patrol areas and communities, make lawful arrests, respond to emergency calls, enforce traffic laws, and interact with community members. The median pay for a patrol officer is around $53,000 annually.

If it is scary to be a patrol officer, then why are so many people applying for it? The answer is simple; it is because of pride and honor. There are only a few jobs in the world that can compare to the satisfaction someone can get being a patrol officer. Knowing you’ve saved lives by doing your job cannot be compared to any amount of money.

How to Become a Patrol Officer?

It is necessary that one is physically and mentally fit before they apply as a police officer. This is because of the tough daily routine that they go through. On the other hand, the minimum educational attainment required is a high school diploma.

A patrol officer training can often last anywhere between 12-14 weeks. The training is conducted by the state’s police academy where they teach the trainee the necessary knowledge in dealing with various situations.

Like in other jobs, supervisors are in charge of monitoring and facilitating the performance of their subordinates. Police supervisors are the ones that supervise and coordinate the movements of those working in the police department.

They can be categorized depending on the scope of responsibilities, and the type of police force they work under. Some supervisory positions in the police force include captains, sergeants, detective sergeants or lieutenants.

Supervisors should possess various skills such as strong communication skills, knowledge of modern communication software and hardware, a thorough understanding of both local and national laws, and more. The median pay a police supervisor is often around $84,000 annually.

How to Become a Police Supervisor

The minimum educational attainment often varies among states and departments. However, obtaining a high school diploma is often the standard for applicants. Additionally, getting a bachelor’s degree in either criminal justice or psychology is a definite plus for individuals. (2)

Most people believe that the job of the police force is limited to urban and rural areas. Most also believe that they are only in charge of protecting human lives and properties. On the contrary, the scope of their responsibility actually encompasses even those that belong to the environment and nature.

Since 1895, our mission has been to have Texas Game Wardens serve the citizens of Texas by providing professional law enforcement, water safety, and search and rescue, while working to conserve and protect the natural resources of Texas.

Fish and game wardens are tasked to protect not just the public, but also animals, plants, and the environmental resources. It is their duty to assure that those mentioned are neither abused nor overused by human beings. A warden, on the average, receives $53,000 annually. (3)

How to Become a Fish and Game Warden

Applicants for becoming a fish and game warden, also known as a conservation officer, are required by most states to be at least 18 years of age. Other departments, however, had changed the minimum age limit to 21.

The U.S. Fish and Wildlife Service prefer applicants who have graduated a bachelor’s in a course related to environmental conservation. However, most wildlife departments are willing to accept those who have only obtained an associate’s degree.

Becoming a transit police is one of the safest choices if you’re looking for a career in the police force. Individuals under this group are often hired by land transportation companies such as railroad or buses to monitor the safety and peace of the area. (4)

In summary, it is their job to make sure passengers from point A to reach point B without any unwanted incidents either by them or directed towards them. According to the latest estimate, there is only about 3,600 transit polices in service. The median pay for this type of job is around $59,000 per annum.

How to Become a Transit Police Officer?

The path to becoming a transit police officer is not as simple as it sounds like. Before you can take up a training course on transit policing, you are required to have at least a high school diploma. However, this can vary depending on what company you are applying to.

A transit police officer needs to have a strong communication skill, excellent deductive reasoning, and the ability to work in stressful situations.

Whether or not you pursue a career in the police force, it is important for us to know what the duties of each type of police officer are. This way we are aware who to call when the need arises.